A Dream Marriage Facilitated by Athithi 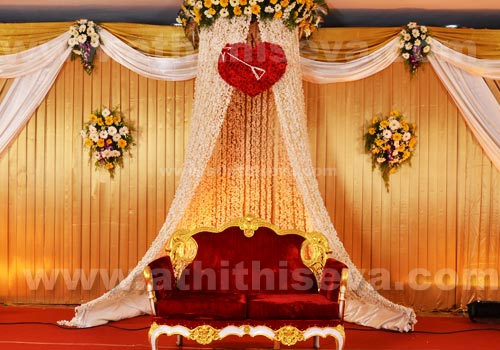 When Thiru Raghuraman and Thirumathi Jayanthi Raghuraman ,walked into Kalyanamalai office on 21st March, they were all in smiles. They said they are yet to come out from the spell of the dreamy marriage of their daughter. The marriage facilitated by Athithi at Raghavendra Kalyanana Mandapam, was  held on 18th March 2013. They came to the office, to personally thank Thiru Kalyanamalai Mohan and Thirumathi Meera Nagarajan, for caring every aspect of their daughter’s marriage, to make it a dreamy wedding.
We are glad to share the words expressed by them…

We had the pleasure of attending one of our close relatives marriage organised by Athithi last year. The arrangements, tasty food served and above all the caring influence of Athithi impressed all of us. That time itself we all have decided to avail the services of Athithi for our daughter’ marriage.  That is what we did after performing the betrothal of our daughter Sow Iswarya with Chi Arun, son of Thiru Ashoak and Thirumathi Uma Ashoak. We immediately contacted Thiru Mohan and Thirumathi Meera Nagarajan of Athithi, to engage them as our wedding planner.

On their advice we fixed up the Ragavendra kalyana Mandapam at Kodambakkam for 17th, 18th and 19th March. We  totally left the other marriage arrangements in the hands of Athithi. Every update from them on the marriage arrangements has  increased our interest. We started longing for the ultimate day with dreams. On 16th March Meera Nagarajan has sent us an SMS stating ‘You will not forget the next two days all through your life and start dreaming about them from now on’. Yes our dreams started unfolding one by one from the morning of 17th March.

Our surprises have started on the 17th morning with the playing of Chendai Melam and floral welcome on the entry of the groom, his parents and relatives into the mandapam. The chanting of Vedha Manthirams, by the well learned shasthira Pandits,has brought in positive vibrations in the hall. The elderly people from the girls as well as the boy’s side just got immersed in the created vibrations.

In any marriage, normally it will be the elders  who will always feel neglected and will feel humiliated, when they don’t  get the deserved respect. But, Athithi took pain to take care of  the elders from both the sides, from the day one to the last day of Kattu sadham. It also provided, separate menu for those who suffer from diabetic. Both the acts earned kudos from every one  and deserves separate mentioning.

When Thirumathi Meera suggested Iswaryam as theme for the marriage, we blindly accepted it, without knowing much of its significance, because, it matched with our daughters name. When we entered the marriage venue on 17th morning we saw the Ishwaryam Kolam design blown into every aspect of the marriage. It was there every where, including the coconut bags given to those attended the marriage. The theme blended very nicely, with every aspect of the marriage arrangement. The unique silver coin gift idea of Thirumathi Meera Nagarajan depicting Goddess Mahalakshmi on one side and Iswarya Kolam design on the other side immediately caught our interest. The coin given in a nicely designed bag received rousing appreciation from every one. All those who have received it, wanted to keep it  in their pooja.
Another aspect noticed by all and liked by all was the regular change in ‘paruppu thengai koodu’ color to match the saree color of the bride. The four-wheel, two-horse driven chariot brought inside the mandapam for Janavasam simply amazed every one. The flower umbrella used over the groom’s Kasi Yathira procession showed us  the enjoyable extreme of Athithi’s imagination. 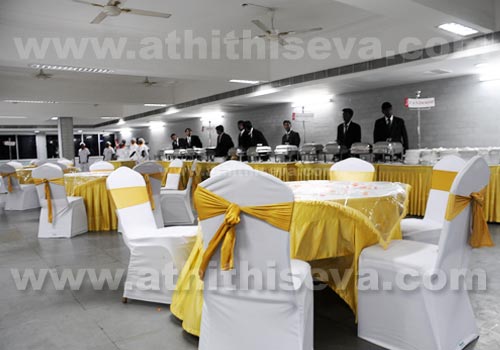 During the muhoortham every one present at the hall were given a small cover containing akshathai. Over the cover the slokam blessing the couple ‘Sarva mangala mangalye Sive Sarvartha Sathakey’ was printed to facilitate every one to shower the akshathai on the couple by chanting the manthiram. This unique and unseen arrangement again pleased every one. Similarly a separate attendant who was posted at the parking area assisted  every one to park the cars without confusion.

It will be impossible for anyone who have enjoyed the culinary of Athithi to describe it in one word  such as good or very good. The mouth-watering menu and the range of food items started right from the morning Viratha tiffin, continued till the final Kattu sadham. It is quite unbeleavable to find that except Idly, rice, dhal and ghee none of the other food items were repeated in the menu during all the days. Similarly, all the food items that were served in the first batch continued and served even in the last batch without any miss. Television fame Yugi Sethu , our relative, who was helping the guests in the food court, called it unbelievable. Cinefame Director K Balachandar who came for the Muhurtham relished the food served. Similarly the top officers from TVS group and my friends from Hyderabad savoured the servings. I relished the Appam Veg Stew and my wife still has the lingering taste of Malpuva sweet in her mouth.

Every one appreciated, the way you have served a highly nutritious food, by including the best of vegetables, fruits and lentils in the menu  expertly as a dietitian. Above all the warmheart shown by your staff, during the serving of items, the hygienic way of serving by wearing gloves, the sequence in serving the menu items and the way the quantity of items required by everyone is met, is possible only for Athithi. The silence maintained by your staff, while serving and their willingness to meet even the exclusive requirements of individuals was appreciated by every one.

The special facilities arranged for the aged, physically challenged and children at every stage helped them to take part in the marriage proceedings with satisfaction. Above all it is a gratifying fact to mention that the highest quality of food served by you did not discomfort any one.

Thiru Kalyanamalai Mohan has honoured us by his presence during important marriage timings and by his individual enquiries at the dining hall.  Our heartfelt thanks goes to Sri Vijaya Bhaskar for managing the proceedings during the other times.The receptionist girls arranged for the marriage and the staff of Athithi have completed their responsibilities with utmost patience and poise.

I would like to end this long letter with the opinion of our grand mother Swarnambal Patti. She said ‘I have participated in over 1000 marriages during my life time and blessed the couple, but never seen a marriage like that of your daughter. She further said that the marriage of deities (Meenakshi Sundareswarer) who have adorned the marriage stage was said to have taken place in Swargha and the marriage of your daughter was held in Boologa swarga arranged by Athithi. The true words came from the heart of the old lady, genuinely reflected every ones feeling who have attended the marriage.
Posted by Unknown at 05:58 1 comment: 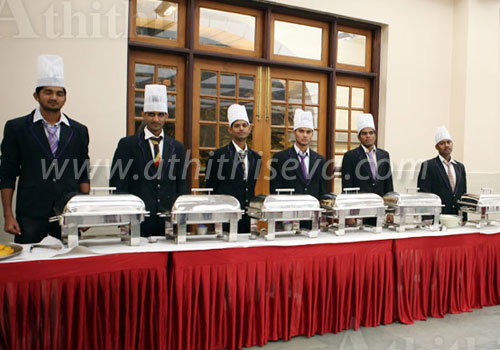 Indian weddings, especially the South Indian weddings, are not complete without serving sumptuous food, to the invited guests. On completing the  nichayathartham or betrothal function, the first thing that comes to the mind of both the bride and groom’s families, is fixing of a decent wedding hall and employing the services of a good wedding planner, for wedding and catering arrangements.

The food served during a marriage, plays a vital role in making the marriage memorable. It is always advisable to avail the services of an experienced wedding planner like Athithi, to serve the purpose. Such high end wedding planners, normally, will never come with pre-conceived ideas, instead, they will make an open-ended approach with their suggestions, to improve the expressed ideas of the client.

The Live Food Counters are the latest addition to the food serving style. The arrangement, will have a number of Live Food Counters, each catering to a particular variety of food items. The limited food items, are prepared fresh before the eyes of the guest and served hot. Some of the food items, served in the Live Food Counters include, chat items, Dosa & Vada items, specialist food items from Bengal, Gujarat, Rajasthan, Punjabi, Mughalai, Marwadi, Kashmiri and others. Such food counters function during the tiffin, lunch and dinner timings.

Buffet style of dining has more or less become a norm, for the  evening reception in marriages. This self service or assisted service eating facility, either have all the food items set up in rows over a table or in smaller sized cubical arrangements, each serving a particular type of food item.

Normally, buffet style serving is arranged in roomy places, to facilitate easy movement of guests. The facility, enables the guests to eat food items of their choice, while enjoying a chat or discussion with their family or friends.  The buffet style arrangement will have starters, other food items and desserts, to complete the food course.

The variety of dishes served at buffets, allows the guests to taste a range of dishes and indulge in feasting the items of their choice. The arrangement, adequately meets the requirements of those guests who enjoy eating, as well as those who are on a diet and eat less. The arrangement, enables serving more variety of food items. 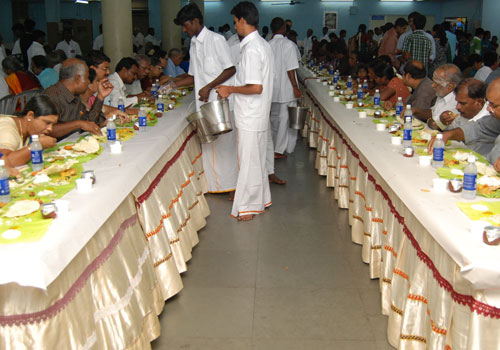 This traditional style of food serving is still valued as the best. The food is served in a pre-determined order, over a plantain leaf or plate, kept before the seated guests. The arrangement, allows the guests to taste all the food varieties served and request second serving on items of their liking. When compared to buffet arrangement, the sit down and eat facility allows serving only a limited variety of food.

The change in societal outlook, lifestyle, national and international level contacts, have necessitated the changes in food serving methods, during a wedding. Presently, the bigger wealthy weddings, observe comparatively increased level of rituals and enjoy more guest participation. Such weddings participated by national and international guests follow their own customized type of food serving styles and arrangements to suit the tastes and interests of the invited guests.
Posted by Unknown at 01:55 1 comment: